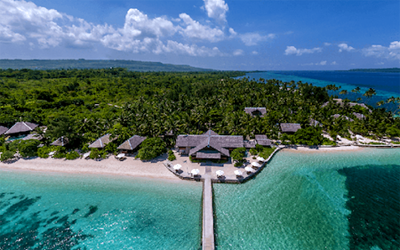 Visiting Southeast Sulawesi Province is a good idea, as Wakatobi Archipelago resides there. That means visitors are able to enjoy a wonderful vacation in stunning islands, including Anano Runduma. Well, the name is a bit unfamiliar, but it has been recognized by passionate travelers. The location is near to Tomia Island and it belongs to Tomia Sub-district, after all. The island is famous for its serene nature and beautiful beaches. Not to mention it is suitable for island hopping! Exploring two charming islands simultaneously is indeed satisfying, so everyone should try it one day.

The Nuance
In terms of size, Anano Runduma is smaller than Tomia. However, it shares similar beauty and characteristics. Most parts of the island are covered by trees and bushes, actually. It also comes with a white sand beach. The texture of the sand is soft, and the environment is clean. This explains why visitors would feel rejuvenated when spending times in the beach. They can even swim and snorkel there. Moreover, it is possible to explore all parts of the island! The only issues are the inexistence of hotels and facilities, so tourists should have prepared some items beforehand. These include snacks, drinks, extra clothes, and snorkel gears.

Exploring Anano Runduma Island
Many types of fun activities can be done in Anano Runduma Island. As mentioned before, the most famous spot is the beach. Visitors can simply enjoy beach walking or sightseeing. Thanks to the nice weather and soft-textured sand. For those carrying a camera, photography also becomes a good idea. It is because the island features many beautiful landscapes, including a small forest, pristine sea, and some nautical creatures. It would be a lucky adventure if tourists see some dolpins in the sea. They often come near to the island in groups, after all.

Due to its desolated location, Anano Runduma Island offers a serene nuance. This explains why many people come to the island for relaxation and lessening. They want to find peace and enjoy unspoiled beauty of nature. In fact, the air is fresh! Spending several hours in Anano never fails to satisfy everyone. It may soothe any stress issues and helps visitors to respect the nature. These include praising the existence of green sea turtle’s nesting place. Hopefully, they would be happier and better person when coming home.

Apart from those nature attractions, the island also offers interesting history. The name derives from the word Runduma. It means a one-night stay over. The rumor has it. Lots of sailors stayed in the island for resting back then. Another story tells about the person who discovered the island. It was La Punggui, a passionate voyager. No one knows his background, though. It is said he decided to guard the island for the rest of his life. The reason was many bad people often stole sea turtles’ eggs in the past.

How to Get There
The first destination is Matahora Airport, which is located in Wangi-Wangi Island. Next, they can head to Wakatobi Port and take a boat to Tomia Island. From there, the last destination is Anano Runduma Island, which takes about 4 hours. For a faster voyage, tourists can rent a speedboat, provided by Wakatobi National Park.