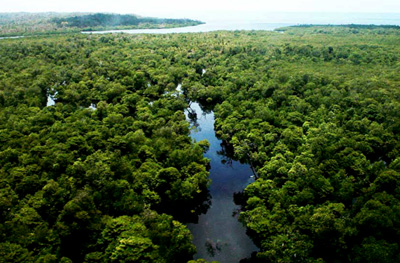 Wakatobi District is part of Indonesia Archipelago. Not only it is popular among the locals, foreign tourists also have an interest in it. In fact, Wakatobi consists of several islands, which are worth visiting. One of them is called Kaledupa and it is the home of Sombano Mangrove Forest. Being a good spot for nature tourism, the mangrove forest offers a trekking opportunity to tourists. Not to mention it becomes a perfect location to eradicate stresses or to find inspiration. Some researchers also come to the forest for studying, in fact.

The Nuance
Well, let’s describe the nuance in Sombano Mangrove Forest. One word represents its environment, which is damp. The land is tarnished and some parts of it are covered by water. This explains why visitors are recommended to wear boots or similar footwear when exploring the forest. Next, it is the vegetation. The most dominant plants are indeed the mangroves, but there are other types of trees there. All of them create a comfy nuance, which is good for relaxation. Even the heat of the sun isn’t an issue. Thanks to the presence of those trees.

Exploring Sombano Mangrove Forest
It is true Kaledupa Island holds many mangrove forests, but Sombano is the most popular one. What can people do there? The prime activity that should be done in Sombano Mangrove Forest is trekking! Even though the route is moderate, it is worth an exploration. The trees are dense and shady, so they help comfort tourists, as well. Apart from the mangroves, other natural attractions are available like sparrows, clams, fishes, and crabs. These animals live in different parts of the forest and become quite an attraction to visitors. The thing is they are rarely seen during bad weather.

Despite tiring exploration, tourists should not miss the chance to visit other beautiful attractions in Kaledupa Island. The most recommended one is Hoga Beach, where people can go swimming and diving. Decorated with stunning white sand, the beach should be in the list of Kaledupa adventure trip, including the mangrove forest. As an alternative, tourists can reach Peropa Beach, which resides in South Kaledupa. The trip takes some time, but it is worth it. Moreover, many types of transportation are available on the island. That means everyone can get around without hassle.

Being a recommended tourist spot in Kaledupa Island, Sombano Mangrove Forest keeps attracting tourists. Most of them are nature lovers and researchers, actually. Some families also come to the location for a family outing. That means parents can introduce plants and animals directly in nature. Later, they can also visit Sombano Village, which is famous for its local culture and stunning salt-water lake! Overall, this is going to be a worthy vacation.

How to Get There
The main checkpoint is Wangi-Wangi Island and the best transportation service is an airplane. Once travelers reach Matahora Airport, they can directly head to nearby port. From there, they need to take a speedboat and head to Kaledupa Island. The last destination is Sombano Village, where the mangrove forest resides.