The Cave of Bats in Kapota Island, Southeast Sulawesi Province 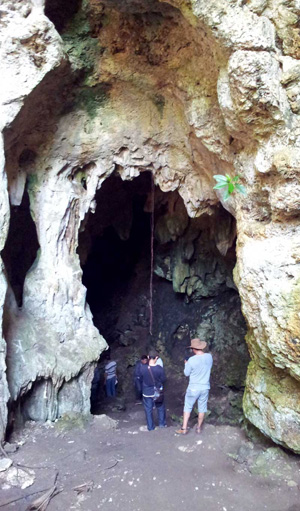 Kambode Island is also known as Kapota Island among the locals. It is located in Southeast Sulawesi Province and belongs to Wakatobi Regency. The location is near to Wangi-Wangi Island, actually. Apart from beaches, the island becomes the home of the cave of bats! As the name suggests, it is the home of wild bats and becomes a tourist attraction in Kapota. Many travelers come to the cave for sightseeing and exploring. Despite the dark environment, the cave is somehow attractive and challenging.

The Nuance
In terms of size, the cave is not quite big and it features numerous unique objects. For example, there is a formation of stalactite and stalagmite in it. The mouth cave is tall, but it is not wide. Once you enter the cave, it gives you a moist and serene nuance so it is better to prepare a flashlight prior to entering the cave. Another feature is the shady bamboo forest near to the cave and some coconut trees. These create a comfortable and relaxing atmosphere for those who visit the cave.

Exploring the Cave of Bats
The bats become the main attraction in the cave, as they live comfortably inside. These creatures sleep and hang on the roof of the cave at noon. Later, they come out for a feast in the evening. That means you can choose whether to witness them sleeping or hunting for foods. What you need to do is to choose the right time to come to the cave. Despite their scary appearance, they are not harmful. If you get lucky, you can even touch them physically.

The cave is not quite deep, so visitors can explore it easily. With proper equipment and a flashlight, you can explore the cave pleasantly. Some parts of the cave are rough and slippery, though. That means any explorers should pay attention their steps. For a safer exploration, it is better to come with a tour guide. He will help you get around the cave efficiently and give some tips in enjoying any attractions in it. Taking some pictures of the bats is possible, as long as you use a camera with a flash feature.

As for the tips, you should have prepared some items prior to visiting the cave of bats. These include a camera, a flashlight, sandals, mosquito repellant, and some snacks. Bottled water is also important, as the exploration may take much energy. Once you have explored the cave, you are able to visit other tourist spots located in Kapota Island. Even island hopping is possible!

How to Get There
A trip to Kapota Island takes much time, especially from Kendari City. Also, it involves numerous checkpoints like Muna Island, Buton Island, and Wangi-Wangi Island. Once you reach Wangi-Wangi, you can take a traditional boat to Kapota. This voyage only takes about 20-30 minutes. Once you reach Kapota, it is time to reach a nearby settlement. From there, you can take a walk to the cave for about another 20 minutes. It is faster if you use a vehicle, which takes only 5 minutes.