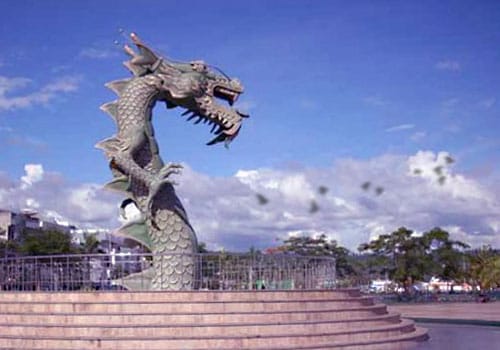 In Bau-Bau City, there is an icon of Kamali Beach. It is the Dragon’s Head Monument. In fact, it becomes the symbol of the city. The location is in the square near to the beach. The locals also have built the Dragon’s Tail Monument, which is located near to Major’s Office. What is the dragon? The Buton Kingdom used a pineapple and a dragon as their symbols. The government constructed such monument in order to rebuild the glory of Buton Empire in this recent era. Apart from that, the monument has attracted many tourists recently.

The Nuance
The Dragon’s Head Monument is located separately to its tail. It represents how the dragon dives in the ground and reappears in the other location. The monument is not quite tall. Its main color is green. The scales have the color of gold. The dragon poses as if he is going to breathe fire. It is located on a foundation with stairs. Not to mention it is surrounded by a metal fence. It is possible for tourists to get near the monument and take pictures. Some people say it is prohibited to touch it, though.

Today, The Dragon’s Head Monument has become a recreational place for everyone. Thanks to its value and strategic location as it is near to Kamali Beach. That means travelers can enjoy those attractions in one go. Not to mention the parking area is nice, so visitors can easily park their vehicle and head to either the beach or the monument. The thing is the location becomes quite crowded on weekends and holidays due to the big numbers of food vendors and street performers.

Tourists have different reasons for visiting the Dragon’s Head Monument, including photography and sightseeing. Due to this reason, you should carry a camera as you are likely to take pictures in front of the monument. Sometimes, local artists come to this area to draw or paint such statue. It is a beautiful and unique object, so you must take advantage of it well. On top of that, it is located to numerous tourist spots, especially the Dragon’s Tail Monument.

How to Get There
If you come from Makassar, an airplane is the best choice. Your destination is Bau-Bau City. As an alternative, you can take a ferry or PELNI boat. What about those who live in Kendari City? In this case, the trip takes about 7 hours and it involves different types of transportation.  For example, it involves a mini bus, a ferry, and a fast boat. Not to mention there are numerous checkpoints, especially Raha City.